As explained in the previous article “The Covid-19 Death Rate Has Dropped by 2/3rds“, there is a day-of-the-week bias in new cases and new deaths. Sundays and Mondays tend to be lows, regardless of whether cases and deaths are rising or falling overall; Fridays and Saturdays tend to be highs. This may be due to a reporting bias, where hospitals are catching up at the end of the week in reporting cases and deaths, or are delaying reporting on Sundays and Mondays, at the start of the week. And the new cases day-of-the-week bias may also be due to the tendency of persons who are sick to go to the hospital or doctor’s on Friday or Saturday, and to delay going if it is a Sunday or Monday. To avoid allowing this bias to affect an evaluation of the new cases and new deaths, a weekly total is used for both.

The death rate is the number of deaths divided by the number of cases. It is a problem that there are many unreported cases. Persons with mild Covid-19 may self-isolate and self-medicate, and avoid going to the doctor’s or hospital at all. Some cases may be largely asymptomatic, so that the person does not realize they have Covid-19. So the death rate is really based on the reported cases, and we might say also that it is, in effect, based on the more serious cases. And that is still a useful statistic.

Comparing total deaths to total reported cases, in the United States, so far, the death rate is 4.09%. (All data for deaths and cases is from wordometers.info) The high for total deaths divided by total cases was on May 16th with a death rate of 5.98%. From that date to the present, the death rate has gradually fallen.

The problem with this metric of total deaths to total cases is that any rise or fall in the death rate has little effect on the value at first. The use of a total means that past death rates, week to week, still have an effect on the rate, and new changes are harder to discern. To solve this problem, this article will use the weekly total of both new cases and new deaths.

The problem with weekly totals, though, is that the persons dying of Covid-19 this week were mostly not persons who first became ill in the same week. It takes about two weeks, currently, for persons to die, if they die of Covid, once they are diagnosed. (See the graphic in this article at the Atlantic). Using this metric of weekly new deaths to the weekly new cases two weeks earlier, we obtain the following death rates. The “Week Ending” is for weekly deaths, and the weekly cases will be from 2 weeks earlier than that date. 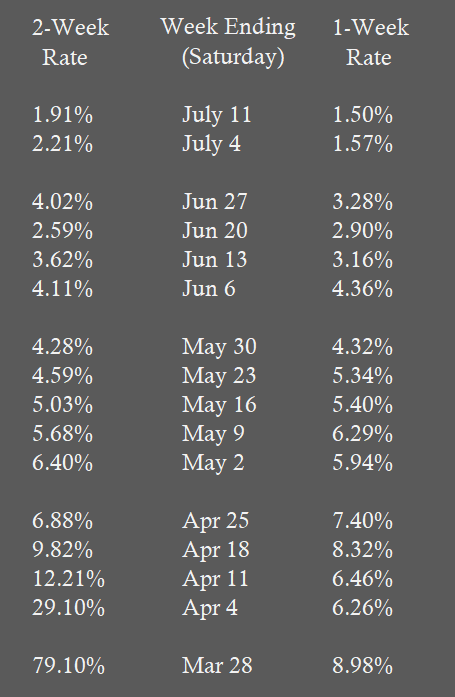 Notice in the chart above that the 2-Week Rate fails to give an accurate death rate in March and April. The death rate could not have been 29% in early April and 79% in late March. This indicates that patients were dying of Covid-19 sooner than two weeks after diagnosis. The death rate was higher and patients died sooner partly because doctors and hospitals were not as experienced at treating Covid at that time. They had fewer studies to rely on, and they did not have as many medications to use.

When we correct that problem in the data by using a 1-Week metric (weekly new deaths divided by weekly new cases from only one week earlier, not two), the data looks much more reasonable. It is certainly possible that the average length of time from diagnosis to death was not one week or two weeks but somewhere in-between. We can obtain that inter-week value by averaging the one-week and two-week rates (data not shown). Or we could begin the week on a day other than Sunday.

The one-week death rate is the only reasonable value in March and early April. Then by late April the 1.5-week rate is probably the most accurate rate. By June both the 1.5 week rate and the 2 week rate are close, and they alternate back and forth as to which one is higher. At the present time, though, we know that the lag from diagnosis to death is two weeks or even a little longer, so the two-week rate must be used.

At present, total deaths for the week ending Saturday, July 11th, divided by total new cases two weeks earlier gives us a death rate of 1.91%. Compare this to a death rate in the range of 6.26 to nearly 9% in late March and April. By any metric, the death rate has fallen sharply. We are definitely under 2% for a death rate, and that does not take into account those mild cases that never get reported (as the sick persons do not go to a healthcare provider).

The Reason is the Season

It is undeniable that physicians have improved their knowledge and treatment regimens in Covid-19 cases. This explains, in part, the drop in the death rate. But this cannot explain the entire sharp drop in deaths. Physicians and hospitals still treat patients for days on end, with only small day-to-day improvements. They do not have a medication which works for an immediate cure (although some new treatments are now vying for that title). So the improvement in the death rate is not due solely to better treatment or greater knowledge.

Covid-19 is a seasonal disease. There are 16 studies showing vitamin D reduces either infection rate, severity of disease, or death rate (listed here). There are other studies showing that Covid-19 is seasonal, that its severity rises in winter and falls in summer, due in part to weather, but mainly due to the increases in blood levels of vitamin D from sunshine. In the warmer months, people go outside, with more skin exposed to the sunlight, and this produces vitamin D in the skin. Summer levels of vitamin D are higher, but winter levels are lower due to this effect (explained here).

When we examine the types of coronaviruses which cause mild upper respiratory tract infections (HKU1, OC43), the best months are August and September, while the worst months are December through February. The severity of these diseases ramps up in October, to November, to December. And that is likely what we will see for Covid-19 — UNLESS THERE IS A MASSIVE VITAMIN D SUPPLEMENTATION PROGRAM STARTING AS SOON AS POSSIBLE!

Yes, I am text-shouting. The number of lives that could be saved by a vitamin D supplementation program, nationwide and worldwide, is in the hundreds of thousands to perhaps millions. The only obstacles are the media and the government.

And those persons in the developing world who cannot afford or obtain vitamin D supplements are not lost; they can obtain vitamin D by exposing their skin to the sun for at least one hour each day. Local dress customs must be set aside. Both men and women need to be dressed in, at most, a t-shirt and shorts. Persons with darker skin tone may need more than an hour in the sun per day. But this will make plenty of vitamin D in the body, so as to obtain a summer-like respite from Covid-19 (as we are currently experiencing in the U.S.), but year-round. Nations with many economically disadvantaged persons often have plenty of sunshine and warm weather. And recommendations for changing behavior to fight Covid-19 can reach them.

A video from Channel 4 News in the UK contains an interview with a woman in the Korail Slum of Bangladesh. She knows about the social distancing rule of 2 meters (6 feet as we say in the U.S.), and she knows about the hand-washing rule. But they cannot follow those recommendations, she says. The slum is too crowded for social distancing, and they don’t have money for soap or access to plenty of clean water.

A rapid increase in vitamin D levels can be obtained by exposure to sunlight or by supplementation. A study by Grant et al. 2020 recommends vitamin D supplementation at a high level to rapidly increase blood vitamin D [1]. As explained in an earlier article:

“To reduce the risk of infection, it is recommended that people at risk of influenza and/or COVID-19 consider taking 10,000 IU/d of vitamin D3 for a few weeks to rapidly raise 25(OH)D concentrations, followed by 5000 IU/d. The goal should be to raise 25(OH)D concentrations above 40–60 ng/mL (100–150 nmol/L). For treatment of people who become infected with COVID-19, higher vitamin D3 doses might be useful.” [Grant, William B., et al. “Evidence that vitamin D supplementation could reduce risk of influenza and COVID-19 infections and deaths.” Nutrients 12.4 (2020): 988]

Their advice: 10,000 IU of vitamin D per day, which is 250 micrograms (mcg) or 0.25 milligrams (mg). After a few weeks, they recommend cutting the dose in half, to 5,000 IU per day. That’s the advice for persons who are well. They also state that, for persons “who become infected with COVID-19, higher vitamin D3 doses might be useful.” [1]. This advice agrees with that of other experts.

Dr. Grant’s position was criticized in a BMJ article here: Vitamin D and SARS-CoV-2 virus/COVID-19 disease. His reply, quoted from NutraIngredients.com was as follows:

“We strongly disagree that vitamin D supplementation should be held in abeyance for prevention until such RCTs are completed and reported. Those at highest risk of infection due to having chronic disease, low 25(OH)D status, and/or being in frequent contact with others likely to be infected should be taking vitamin D,” he says.

“As noted, there is mounting evidence that vitamin D can reduce risk and severity of RTIs including that the mechanisms are known, that there are many health benefits of higher 25(OH)D concentrations, and that there are very few adverse effects of vitamin D3 supplementation… Thus, there is much to gain and little to lose by taking vitamin D supplements now for COVID-19 prevention.”

We don’t need to wait for RCTs (randomized controlled trials), as we have sufficient evidence that vitamin D supplementation does much good with little risk of harm. (RTIs are respiratory tract infections.)

The current sharp decrease in the death rate from Covid-19 in the U.S. is due in large part to increases in blood levels of vitamin D in the population, due to the warm summer weather. This benefit will peak in September and will end in October. Then the death rate will rise sharply, and it will be too late to save many persons by vitamin D supplementation. It takes time to build up protective levels of vitamin D in the blood, whether by sunshine or by supplementation.

Read the studies on vitamin D.

Ronald L. Conte Jr.
Covid.us.org
Note: the author of this article is not a doctor, nurse, or healthcare provider.

Consider supporting Covid.us.org with a one-time or recurring donation via PayPal

I do not receive any money from links to Amazon or other websites. The links are offered for your convenience.

Covid.us.org offers explanations of recent research into Covid-19 for informational purposes only. For treatment of Covid-19, see your healthcare provider. Nothing said herein is intended to constitute or replace medical care or advice.

Some studies reviewed on this website present scientific evidence of benefits or detriments from certain medications, supplements, or treatments. These studies are not definitive and further research is needed. Please do not use this information to treat yourself or anyone else for any disease or disorder. Consult a physician.

30 studies show evidence that optimum levels of vitamin D in the blood may reduce your risk from Covid-19. Ask your doctor if you should take vitamin D.

The information provided in this website is for educational purposes only and not intended to be a substitute for professional medical advice. Please consult your doctor before making any healthcare decisions, especially if you or a family member are ill.